Read about hurricanes, or click on the play button below to listen aloud. What Is a Hurricane?

A hurricane is a huge storm that forms over warm ocean water. Hurricanes have winds that move in a circle. Hurricane winds are very powerful and can move at speeds from 120 km/h to over 300 km/h. Hurricanes can also bring large amounts of rain. Hurricane as seen from space

How Do Hurricanes Damage Structures?

Strong winds and heavy rain can do a lot of damage when a hurricane moves over land. 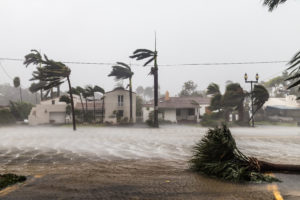 Wind: Hurricane winds can be strong enough to shatter windows. The winds can even knock over tall trees, which might fall on buildings or cars. Strong winds can pick up objects such as patio furniture and send them flying with great force into buildings, causing damage.

Strong winds can also cause a storm surge in areas along a coast. A storm surge happens when strong wind pushes water from the ocean onto land. When winds make a storm surge move quickly, the force of the moving water can be strong enough to move a house or destroy it. Storm surges cause flooding in areas near the coast. Hurricanes can cause flooding

Rain: Heavy rain from a hurricane can cause floods in areas that are not close to a coast. The floodwater can be very deep, sometimes reaching almost up to the roofs of houses. Water and mud seep into the houses and do a lot of damage. Wooden structures might not be safe after a flood. Water soaks into the wood and makes it weaker. There is danger that a wooden structure might collapse.

Fun Fact: A hurricane name is retired, or taken off the list if the storm has caused severe destruction or many deaths. A new name is then added to the list to replace it.