Topic – South America: Incas versus Aztecs—What Is the Difference?

Incas versus Aztecs—What Is the Difference?

The Incas and Aztecs were two groups of people who lived long ago in Central and South America. How were these groups different? In what ways were they similar?

The Incas lived on the southeastern coast of South America, where Peru is today. They had the largest empire ever in North or South America. This empire began to form in the early 1200s. The Aztecs lived north of the Incas, up in modern-day Mexico. They had a market area in their capital—where Mexico City is today—that was as large and varied as any market found in Europe at the time. Farming was important for both groups of people. The Incas cut the land into steps on the sides of mountains, so they could have flat ground to farm on. The Aztecs had floating gardens. They made rafts, then covered them with soil and planted seeds on them.

Both groups used fertilizers and irrigation to help their crops. They grew many similar crops, including corn, tomatoes, cocoa, and peanuts. 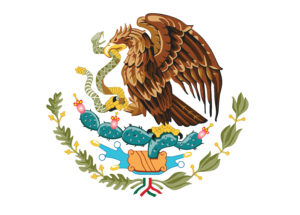 Coat of arms of Mexico

Both groups of people told similar myths about their beginnings. They were travelling and searching for the right place to begin their cities. The Incas were told to build a temple to the sun god where a stick had sunk into the ground. The Aztecs were told to look for an eagle perched on a cactus and clutching a snake. You can see the eagle on Mexico’s flag today.

Both groups worshipped a sun god and built pyramids with temples on the top. The Aztecs believed the sun would not rise until they sacrificed someone to their sun god. The Incas also believed in human sacrifice but were generally gentler people. 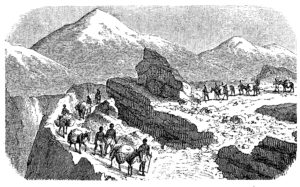 Caravans on the Inca road, extensive and advanced transportation system of roads

The Inca had a great road system with runners carrying messages throughout the empire. Both groups had well-developed governments and legal systems.

Both the Incas and Aztecs were conquered by forces from Spain. The Aztec empire was destroyed around 1521, while the Incas lasted until 1572. Descendants of these proud groups still live in the areas where their ancestors once ruled the lands.