The Medieval Period, or the Middle Ages, took place from about 400 to 1400. During that time, many people were involved in farming or growing food. This was especially true in England. In medieval England, farms were small. They were worked and tended by peasants, but the peasants did not own the land. It was owned by the lord of the manor, who rented out strips of land to the peasants.

A peasant’s strips of farmland were scattered over the manor. This may sound inconvenient, but it meant that each peasant had some good, rich land, as well as rocky land that was not as rich. Peasants often grew the same crops as their neighbours. However, each strip of land was separated by a thin bank of grass, to keep the edges of each strip clear.

In addition to fields and gardens, medieval farms included fruit and nut trees. 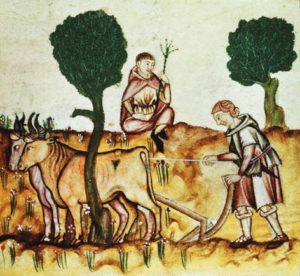 In the spring, peasants plowed their fields to loosen up the soil. Next, they spread manure on the fields to fertilize the soil. Then they planted the seeds.

By late summer, the farmers began to harvest their crops. There were few tools and most were not very useful. So peasants depended on each other to help with all the jobs, from planting to harvesting. They took turns working together to harvest one farmer’s fields, then moved on to the next, until they were all done. In addition to their fields on the lord’s land, peasants in medieval England had small gardens around their homes. There they planted herbs and vegetables, as well as fruit trees. The garden helped to ensure that the family had more food to eat and that there was a variety of food.

There were few flowering plants in peasant gardens, except lavender and roses, which had strong, sweet scents. There was no room for a lawn around the home. Peasants raised a few animals, such as chickens

Most peasants also raised a few animals, such as chickens, geese, sheep, and pigs. The animals were not fenced in. Instead, they wandered everywhere and ate whatever they could find.