In 1775, war broke out in the country now known as the United States. The conflict was between the British and the Americans. The British promised land in Canada to all the black people who fought on their side. These people became known as the Black Loyalists. 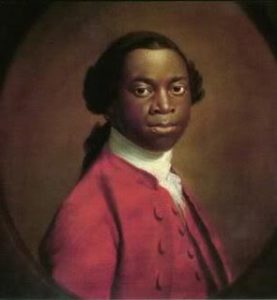 Thomas Peters, Black Loyalist Soldier and one of the “Founding Fathers” of the Nova Scotian Settlers

Freedom and a Farm

Life was very hard for black people living in the United States in the late 1700s. Many were slaves. Those who were not slaves worried about being sold into slavery by sly traders. All black people faced discrimination because of the colour of their skin. It was difficult for them to find good jobs or places to live.

When the American Revolutionary War broke out between the Americans and the British, many black Americans saw it as an opportunity to make a big change. The British side not only offered them a farm in Canada but also promised them their freedom.

This settlement in Nova Scotia became known as Birchtown. The name comes from Brigadier General Samuel Birch, a British official. He helped many Loyalists leave the United States.

Sadly, even in Canada, the Black Loyalists faced discrimination. When the American Revolution ended, many people—blacks and whites—flooded into Nova Scotia. There was not enough food for all these newcomers to eat or enough places to stay. The Black Loyalists were discriminated against and beaten up, just because of their skin colour.

As for the promise of a farm, some Black Loyalists waited six years before they received any land. Then they received only a tiny piece of land, much smaller than what they had been promised. The land was often rocky and far from the nearest town or water.

Many Black Loyalists found Canada bitterly cold. Some left and sailed to Africa. Others moved elsewhere in Canada in hopes of finding better conditions. But many of the Black Loyalists stayed in Nova Scotia and New Brunswick. Today, lots of families in the Maritimes can trace their ancestors back to these brave people.