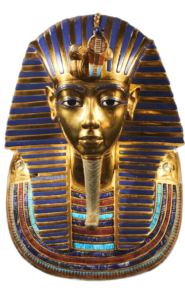 Who Was King Tut?

King Tut’s real name was Tutankhamen. He was a pharaoh in ancient Egypt. A pharaoh was a ruler, like a king, in ancient Egypt. Tutankhamen lived a short life—he died when he was just 18 or 19 years old. While he is famous today, few people in the modern world had heard about Tutankhamen before his tomb was discovered in 1922.

Tombs in the Valley of the Kings Valley of the Kings

Archaeologists learn about history by finding and studying objects from the past. Many archaeologists worked in the Valley of the Kings, an area in Egypt where Egyptian pharaohs were buried in ancient times. Over centuries, these tombs had been covered by sand. Archaeologists digging in the sand had discovered the tombs of many pharaohs.

Howard spent years searching the Valley of the Kings for Tutankhamen’s tomb. Finally, he got a lucky break. His team discovered some steps buried in the sand. As they dug deeper, they uncovered a doorway that had Tutankhamen’s name on it. Howard knew it had to be the tomb of Tutankhamen. Tomb of a pharaoh, in Egypt’s Valley of the Kings

In ancient Egypt, pharaohs were buried with many valuable objects. When archaeologists discovered the tomb of a pharaoh, they often found that robbers had already broken into the tomb and emptied it. Howard hoped that Tutankhamen’s tomb still held objects that would help him learn more about ancient Egypt. What Howard found inside the tomb was beyond anything he could have imagined. King Tut tomb and treasures at the Tutankhamun exhibition

There were four rooms inside the tomb, filled with objects. It turned out that robbers had broken into the tomb, but they had probably stolen only small objects that were easy to carry and sell. What the robbers had left behind was still a treasure trove. One of the most spectacular finds was a solid gold coffin that contained the mummy of Tutankhamen. There were so many objects inside the tomb that it took Howard and his team 10 years to clear out the tomb.

Why did it take so long to empty the tomb? There were four rooms inside the tomb (see the diagram). The tomb was emptied one room at a time. The antechamber alone contained over 700 objects.

Tutankhamen’s tomb turned out to be one of the most amazing discoveries ever made in the Valley of the Kings. Layout of the Tomb

•  King Tut became a pharaoh at the age of nine.

•  King Tut’s tomb was discovered nearly 3000 years after his death.

•  When King Tut died, he had a severe injury to his chest and a broken leg.