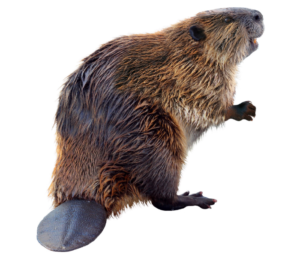 The beaver has had a bigger impact on Canada’s history and its exploration than any other animal or plant. No wonder it was chosen as a symbol of our country.

Built for the Water

The beaver is a rodent, like a mouse or a rat. But the beaver is the largest rodent in North America. It is built to spend time underwater. Thanks to its thick fur and waterproof oil, even when a beaver has been submerged for several minutes, it is still not wet to the skin.

A beaver can close valves in its nostrils and ears when it dives underwater. This furry swimmer can even stop water from getting into its lungs.

Beaver pelts were the most valuable furs in Europe during the 1600s. The best ones came from Canada. Europeans wanted the furs to make beaver hats—they were status symbols at the time. It is likely European countries would never have explored and fought over Canada if it were not for the beaver and its thick, rich fur.

When the fur trade started, scientists believe there were 6 million beavers living in what is now known as Canada. By the mid-1800s, when fashions in hats changed, the beaver was almost extinct. Since then, the beaver’s numbers have slowly increased as Canadians realized how important this animal is. Beavers build dams and lodges. That makes them one of the only mammals, besides humans, that can build their own environment. Beavers live in the lodges, which are dome-shaped and made of sticks and mud. The entrances to a lodge are underwater.

Beavers chew down small trees to build dams. These provide still, deep water to protect the colony’s lodges from predators. Deep water also means the pond’s bottom will not freeze, so the beavers will not be blocked in their lodge.

Without beaver dams, small streams would flow through forests and meadows without stopping. The dams cause ponds and marshes to form and many wild birds and animals depend on them.